It’s not that I know more than those self-development and motivational gurus. Or that I’m a guru myself. (Ok, maybe I’d be a thought leader someday… who knows?)

But I’m keenly aware of guru hype — there’s so much fluff in most of what many feel-good purveyors say — that don’t fit with logical reasoning. And a lot of those things are just plain commonsense to me. Of which I don’t need any rah-rah fella to pump up excitement over nothing 🙂

Indeed, I was right about at least 3 things. These are popular topics floating around in the ever-increasing circle of how-to-do-it-better practitioners. Many wannabes seem trapped chasing these ideas.

Somehow, I knew it all along. Call it gut feel if you may. And if your gut is telling you otherwise, do listen and trust yourself. I did.

This is what I thought about those three things… and now have seen proof they don’t really hold much water. Let’s get into two of them here in Part 1 of my post on guru hype and what it entails.

I’m quite sure many of you have come across this idea about visualizing your success.

The gurus would have told you mostly to imagine the future scenario in which you had attain your goal and are enjoying the fruits of a successful venture.

Some would say you need to remind yourself constantly of the new lifestyle you’re after, so they prescribed you the formula of creating an image board. A DIY board you look at each day, laid out with pictures of items which represent you’ve made it.

Like photos of a nice house, fancy car, exotic travel destinations, etc. You get the drift… this form of guru hype can indeed be appealing.

(And you can see such boards on Pinterest all the time; just saying. Now, don’t go checking them out now and fall into the darker side trap of the Web — it’ll just be wasting your time, plain and simple!)

Others go even further to preach that you can start getting used to the new life now by living it. At least have a taste of some aspects of what success means, they’d say. People have come to call this the “Fake it till you make it” attitude for getting there.

Turns out most of these concepts are a load of crap.

Aside: Speaking of crap, here’s an acrostic I made and posted on my WittyCulus fan page early May. It’s about what keeps going on in the Internet Marketing space, where gurus suck newbies and wannabes dry with their slick sales talk… product launch after product launch, they continue to rake in the big bucks! 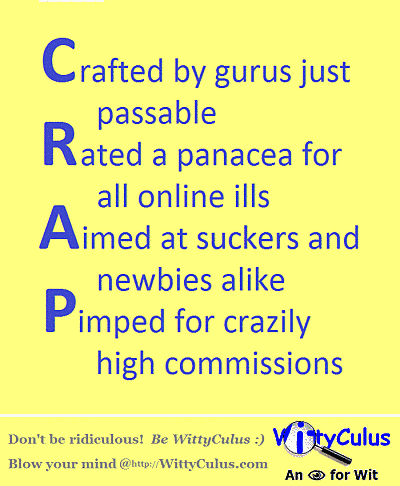 For there was one thing the self-help masters failed to mention. Perhaps that fact seemingly got lost in all their hype-y promotions? Or was it just so convenient to omit? (You can take your pick; it doesn’t really matter!)

Visualizing the Steps Leading to a Desired Outcome Can Be Helpful

I was listening to an Active Growth podcast on goal setting and visualization not too long ago. From it, I learned the fact that visualizing success is a narrow concept mainly designed for and taught in the sporting field.

Nope, their form of visualization ain’t what the rah-rah motivational speakers talk about! Runners aren’t asked to picture themselves on the podium receiving gold medals, in order to perform better.

Instead, they are taught a mental process to rehearse how they get ready to run. All those tiny but necessary steps leading to the starting pistol going off are just as important as, if not more crucial than, the actual sprint or long distance run.

Practice after practice, this process goes on in the head each time till it becomes habit. It allows the athlete to focus on what to do optimally — that’s how good runners run better and win races more often.

So, seeing the process in the mind and then doing it can help one to approach the desired outcome, after rounds and rounds of iteration. This process doesn’t dwell on the glory and good feelings that comes afterward, from reaching the goal.

Visualizing Only Success is Frowned Upon

Contrast that with visualizing only success and the fruits it brings, the end point which many so desire (and look for/hope to find shortcuts). To me, it’s quite clear which approach will help get you there.

If you’re still skeptical, consider what the podcast creator, Shane Melaugh, CEO of ActiveGrowth.com, said — you can start listening at the 3:56 minute mark — when he referenced Dr. Piers Steel, author of the best-selling book “The Procrastination Equation“:

… he described positive visualization about your businesses end goal and success as a kind of entrepreneurial pornography.

Pornography is certainly a harsh word to use, but Dr. Steel was making a strong and valid point. At least, that word would have gotten your attention, especially if you’re stuck deep in all that guru hype about success visualization.

Note: I have not read Dr. Steel’s book, but it’s definitely on my list. Right now, I’m into “Stretch” by Dr. Scott Sonenshein, a book recommended by Shane as well. I’ll be sharing some of my discoveries from this great on-going read, in a while… 🙂

One of the oft-quoted advice on success, from the angle of perfecting a skill, is the 10,000-hour rule.

This rule was introduced and popularized by Malcolm Gladwell in his book “Outliers: The Story of Success”. It’s the notion that “achieving world-class expertise in any skill, is, to a large extent, a matter of practising the correct way, for a total of around 10,000 hours.” (Source: wikipedia)

Many great achievers and successful people, be they golfers, biz whizs like Bill Gates, even The Beatles, seemed to have spent enormous number of hours before arriving at the greatness they stand for.

As an example, Gates is said to have spent 10k hours programming computers at the young age of 13; and we all know he is a billionaire. Is there a connection here? A remote one (which I failed to see) or just a manifestation of guru hype (which I see much more clearly)?

Now, isn’t Gate’s massive wealth due to his business savvy and how Microsoft came to dominate the PC industry with their software?

Put it another way, if another kid were to start developing software and use up 10,000 hours, is success guaranteed? We can’t even be sure if the resulting software product will be bug-free! Such is the complexity of making software that no one can claim perfection.

Practice Sometimes Predict Performance… But in Limited Cases and Measure

Well, Dr. Sonenshein stated in “Stretch” (on page 76) that research has shown practice does predict performance in some scenarios. So all is not lost, it seems.

In games for example, only those with infrequent rule changes, such as Scrabble or chess, benefitted from lots of practice. Even so, the contribution of such practice made up only 26 percent of actual performance!

For music and sports, where people are also expected to practice extensively, the contribution figures were found to be lower, at 21% and 18% respectively.

But look at education — practice contributed only 4 percent of performance. So much for “mugging” (see the definition of this local slang word here) as the way to score entry into top schools!

And both aircraft piloting and software programming clocked in at below 1%! Ain’t that a scary thought? I’m sure many of us assume pilots train hard and the navigation systems they use — a lot is controlled by software, in case you aren’t aware — are well designed.

The bottom line is this: what we face mostly in our professional and personal endeavours are less-predictable challenges, where performance attributed to practice amounts to single-digit percentage figures. If you’re lucky, you could do a bit better, getting into the low-teens.

Obviously, these findings are a big blow to the 10k-hour rule. There’s no real magic in that rule, just guru hype raised to a new level.

So, no need to think much about those ten thousand hours of practice, let alone perfection! Practice didn’t make perfect in all the cases mentioned.

So far, we’ve seen that both the 10,000-hour rule and success visualization are but myths being perpetuated. Those feel-good gurus who push such impractical ideas shouldn’t be the people you go to for advice on success in life, in my humble opinion.

Instead, keep an open mind about such and other topics, read more and let commonsense prevail. For the most part, nothing much new is being shared — perhaps you’ve already noticed much guru advice is recycled material presented in a slightly different manner.

And if you were like me, you could have been right all along too in being skeptical. And laughing it off mostly 🙂

Still, there’s more to bring to light in Part 2 of this long article about the guru hype so prevalent in our times. Do come back to learn about it and get useful tips on how to move on while pursuing positive change.

In the meantime, do share your thoughts about how you see gurus and what they preach. I’m sure some people will not agree with what’s being said here, so let’s get a healthy discussion going to exchange our differing view points, shall we?

[11] Getting Ahead with The 30-Day Challenge and Daily Reminders