(This is my go at “live” blogging — I’ll recount events this morning at the WPCF Walk as they take place; and record them on my phone for later posting.)

The 6.00am alarm has just gone off and my short sleep has been interrupted.

I woke feeling a little tired but with some anticipation. Yes, this is the day for the WPCF Community Walk 2017.

A gust of wind rushed in as I opened the windows to greet this Sunday morning. I have not been up this early for a long time now, so it’s both refreshing and a slight challenge at staying awake.

Originally, I had planned to sleep at 10pm the night before so that I’d get a full 8-hour rest. But I had hit the gym at 9pm for a session of strength training, so was still up at 10 plus after a shower.

And then an idea came to me to fill that rather large white space on the Walk bib as I pinned it to the tee shirt. That meant the brain went into overtime and kept me busy till 1am!

I’m going to see if I can catch an early bus to go towards Yio Chu Kang Rd, where I can transfer to another that goes to Hougang Ave 8.

Note: Availability of buses at this time of day is somewhat limited! Luckily the lack of traffic meant a normally long-winded ride — one of those bus services running — is now smother and quicker. 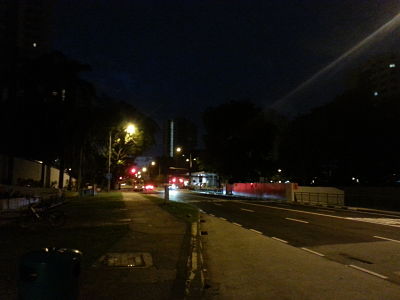 Managed to hop on bus service 73 and transferred to service 136 at Boundary Rd. The second ride will take me close to Punggol Park.

7.06: Alighted at bus stop near that Upper Serangoon landmark: Church of the Nativity of the Blessed Virgin Mary. A short walk to the park along Hougang Ave 8 from here. 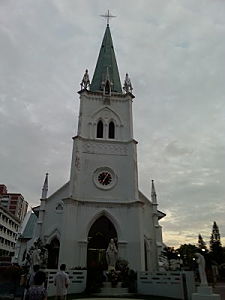 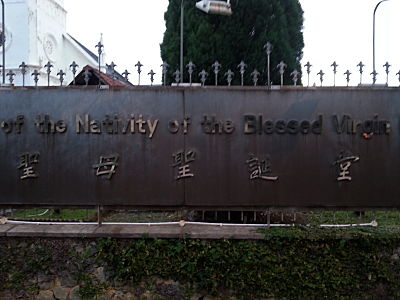 7.14: What a beautiful morning at the park. A crowd has already gathered around the Pavilion meet-up venue. The MC is warming up the people. 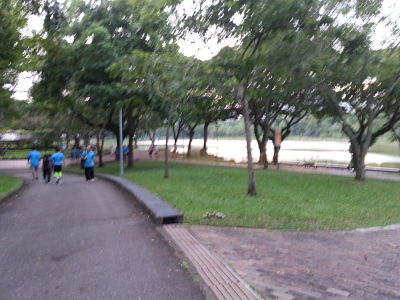 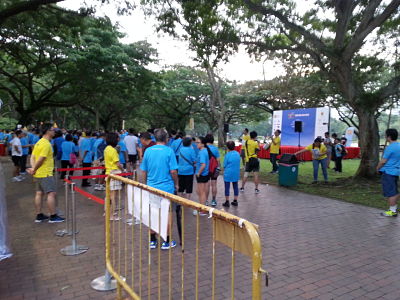 The day’s programme, sent out by the WPCF team on Saturday, looks like this… 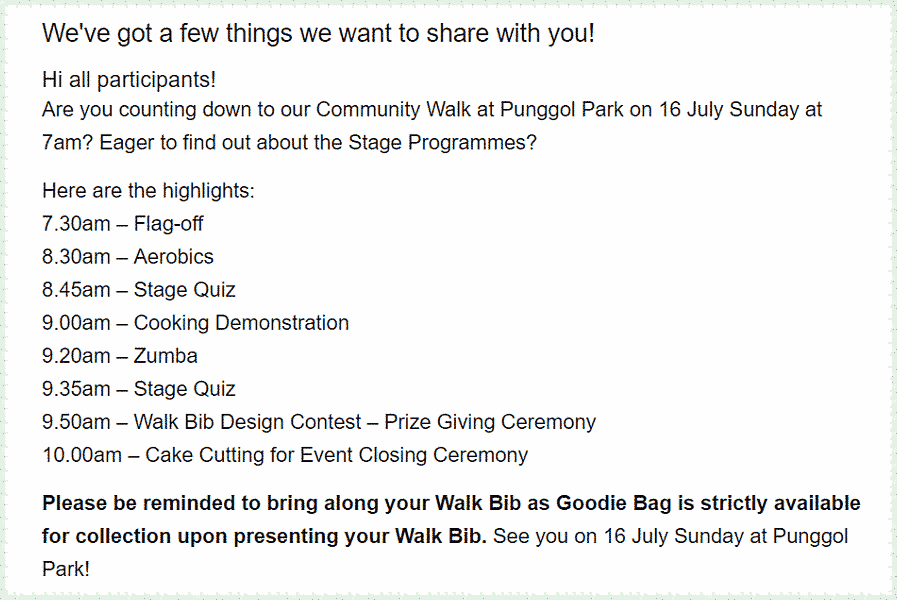 Getting Ready for Flag Off

Participants are moving to the area behind the gathering point, nearer the pond, for a quick warm-up before the walk begins.

7.20: Warming up time, guided by fitness instructor. The signboard near the pond serves as a good reminder. (I was busy with warm-up, so forgot to snap pics!) 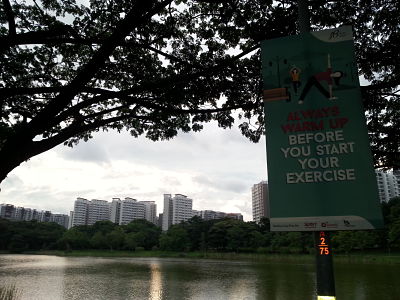 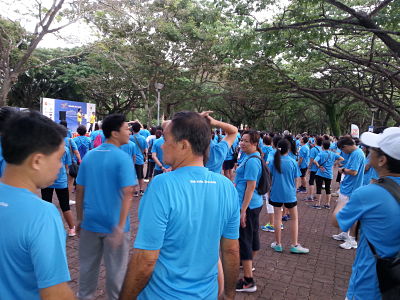 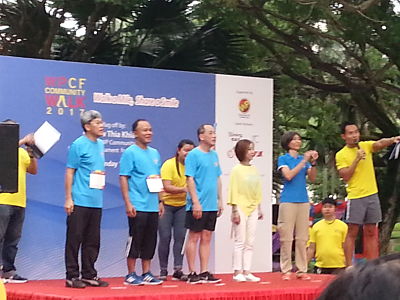 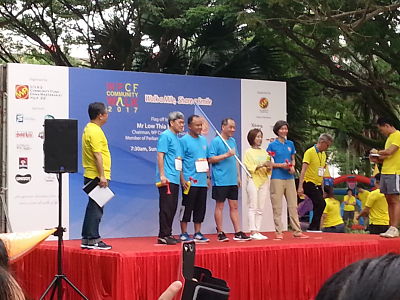 Other WP members can be spotted amongst the crowd, all geared up for exercise.

The MC wished us a good walk and reminded participants of the activities coming up after the walk.

It’s a slow start as everyone gathers pace and moves along. The hustle and bustle at Punggol Park is readily felt, even at such an early hour. It’s not just us WPCF Walk participants here!

7.39: Lots of activities at the park, like this group exercising to music; and folks doing Qi Gong. Many joggers too. 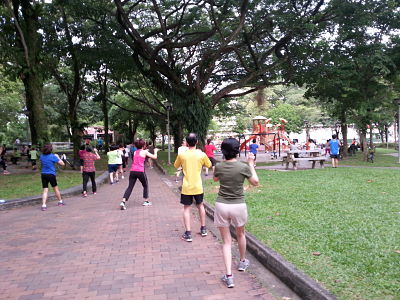 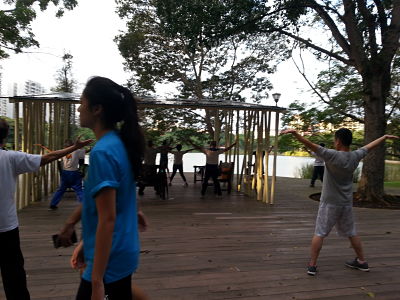 7.52: We’re out of the park, heading towards Tampines Rd / Punggol Promenade. 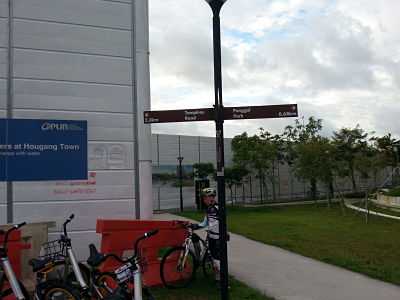 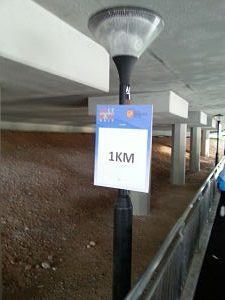 7.57: There are participants walking back! So fast, these must be serious walkers!

8.01: Water point reached. Got a bottle of unchilled water and sipped some 🙂 Good to stay hydrated even though the sun is not quite up yet. 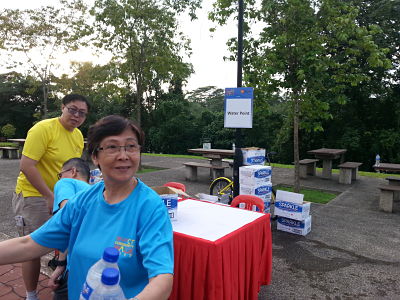 8.03: Reached 1.5km check point. Also the turning around spot for the return leg to the Park.

8.14: Under that low bridge that goes across Buangkok Dr. A nice breeze is keeping us cool.

8.18: Met and shook hands with Mr Low. He’s been busy mingling with Walk participants since we began the journey en masse.

8.22: Back in the park, beside the pond and exercise area. Can hear the MC from afar briefing people who have finished walking. 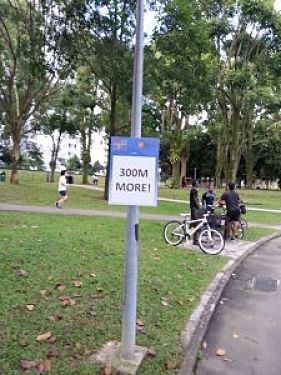 All Walk participants who wore their bibs got to collect a goodie bag each at the end of the walk.

Aside: I’m back home and looking at what’s inside the goodie bag.

Hmm… lots of instant food — not to my liking, really, as these are generally not healthy. 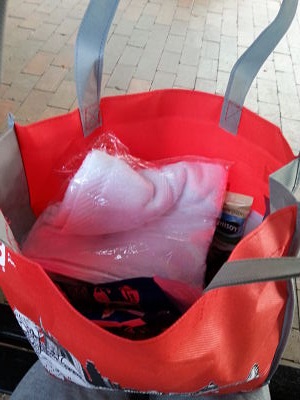 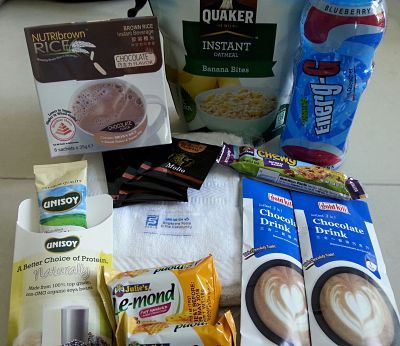 I’m throwing away some items which I deem bad:

I’ve had enough of these poor quality stuff. Dropped a quick note to the WPCF organizing team to alert them of such lousy items in the bag. Hopeful that they’ll be more stringent with sponsor selection in the future.

There’s free massage for those who would like to relieve stress.

And a play area for kids to bounce around. 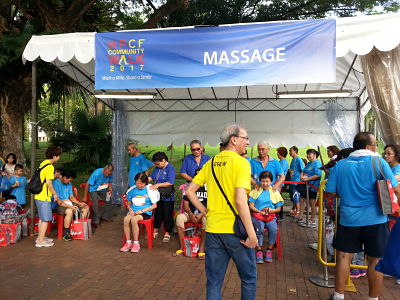 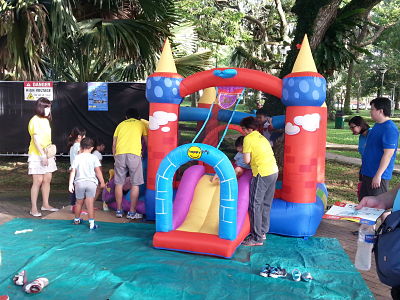 Ok, the aerobics exercise is about to begin. Think I’ll give this a miss.

Now the aerobics team is asking people to do burpees. Have you even heard of this workout? It can be very taxing for those who aren’t that flexible in movement. 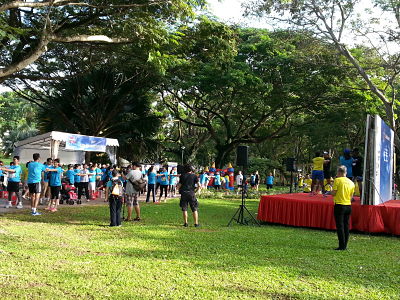 It’s 9am and the aerobics session has just ended. Next, a sponsor is giving away pineapple tarts to participants who joined the workout.

And a quiz round has started.

Hey, I just found a welcome note in the goodie bag. This Walk is actually the first ever by WPCF. Wow, I didn’t know that! 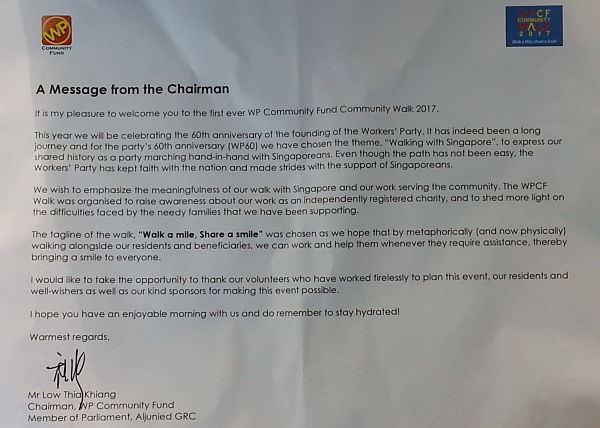 Quiz segment ended. A cooking demo is about to start. But there isn’t any major cooking setup on the stage. Just a basket with stuff inside.

The chef, from D’Kranji Farm Resort — he said he is an accidental one, not a trained cook — is just going to talk. He’s going to teach how to make mayonnaise in under 45 seconds!

He’s got a volunteer to go on stage to do as he guides. There goes one clove of garlic, an egg and like a cup(!) of canola oil into the jug. Blend the mixture, tilting the electric blender a little… but don’t stop mixing until it’s done!

Next, another volunteer has been asked to make a chilli mayo. I think I heard two chillies will be added to the formula. The chef said even laksa leaves may be used for yet another variation of home-made mayonnaise.

I’m going to taste the chilli mayo now. Nice punch of spice; quite tasty though a tad oily. Perhaps I’ll try this recipe at home as a dip to go with baked tortilla chips 🙂 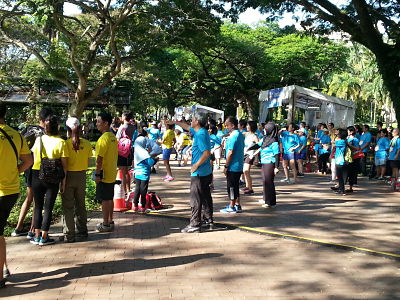 All in, dancers, both on and off stage, had a fun workout for a full 20 minutes. Amazing energy!

The sun is finally making its presence felt. We are blessed with such good weather this morning, given that it rained the past few days; sometimes rather heavy too.

Event Bib Design — And the Winners Are…

Next up, the results for the walk event bib design contest.

So, did the roving team spot my bib?

I understand someone from the team would inform walk participants who had designs that made the cut.

Up till now, I heard nothing. So nope, my bib design wasn’t shortlisted.

Anyway, my design probably looked geeky — I can’t draw for nuts, but word play is my thing 🙂

Four winners — all had drawn graphic designs — collected their prizes given out by Mr. Low. 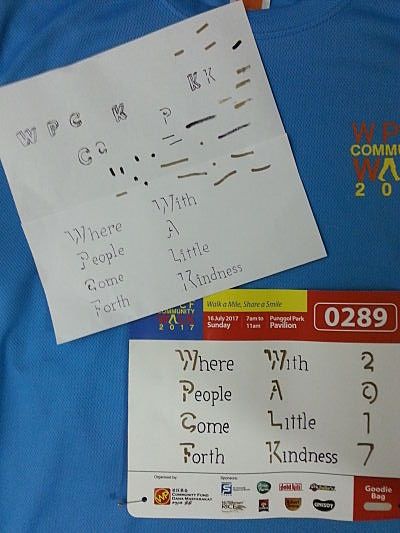 Finally, cake cutting to mark the end of the WPCF Walk 2017. This has been a successful inaugural event, no doubt.

And July babies are invited to join in the celebration as well. Happy birthday to all of you 🙂 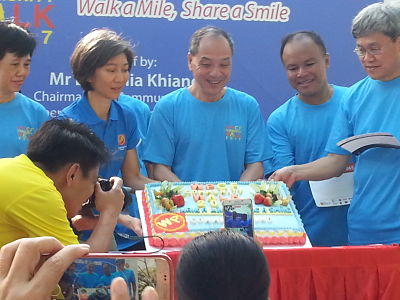 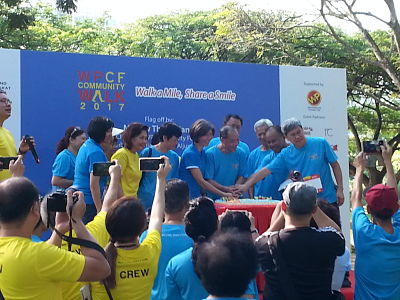 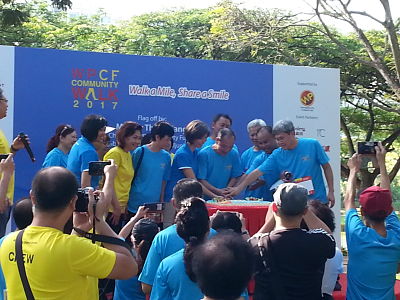 It’s now 10am and this morning’s event has just wrapped up. What a meaningful outing it was for me.

And I actually did some exercise on a rest day!

[02] Online Presence & Identity: My Namesake Domain and Other Thoughts

[11] Getting Ahead with The 30-Day Challenge and Daily Reminders