[05] Wait… That’s Not Good Enough, Yet – Is Perfection Killing Your Endeavours?

I don’t know about you, but perfection is my thing.

Or at least it was, until recently. I had a change of heart about this because of a certain simple realization.

Now, I’m not saying perfection is no good. In fact, I will still strive for it in some situations. I’m human after all.

But as far as writing posts for my blogs goes, near-perfect is more than good enough!

Go watch this video created by Shane Melaugh to find out why.

Shane is the owner of ActiveGrowth.com and creator of Thrive Themes. He has produced thousands of blog posts, articles and videos, so he knows the topic very well 🙂

Perfection is Never, Most Times and For Most People

Everyone wants to be perfect, but perfection seems reserved for the very few. Many of us try anyway, because we were taught that “practice makes perfect.”

Does that mean you shouldn’t work your craft to hone your skill? No. On the contrary, often we would need to practice for long hours just to acquire a new skill.

But endless repetitions do not necessarily lead to perfecting a skill. Diminishing returns is the more probable outcome rather than perfection. Realistically, as one gets better at something, the incremental benefit from more practice becomes less felt.

Even if one attains a robot-like quality at performing a task, something most of us would equate to flawless execution, he or she is perfect only until someone “more perfect” shows up for a challenge.

It does take some getting used to to see it that way! I’d wager that once you have this realization, life may become less stressful 🙂

Perfection in Writing is Elusive! Who Says?

In this post, I want to narrow the discussion to writing.

When it comes to putting thoughts into words, the second biggest “enemy” after writer’s block is often not finishing what you set out to write. There’s always that nagging feeling that certain portions of a written piece isn’t perfect and can — no, has to — be reworked.

And reworked it gets… but perfect it doesn’t always become!

Which then leads to the inevitable delay — either waiting for a better way to express yourself (in writing) or “better” material to fill your article.

All this mainly because you think your readers will be judging you based on what and how you wrote. And if you aren’t perfect there, then what you said in your writing isn’t valued.

Nothing could be further from the truth.

The message in the content should always come first, be it from the author’s or reader’s perspective. For the writer, the crux of the matter is in communicating what you want to say; if you can present it beautifully, that’s a bonus!

For the reader, the purpose of perusing someone’s written work should be to learn more about the subject matter, hopefully. If an article is all nice and pretty to look at, but lacking in actual content promised by its title, then what is the point in following the author?

Who Decides What is Good Enough?

In the first place, where did the notion of “good enough” come from?

Sure, we all have expectations of what we endeavour to do — these can come from seeing what others have done and achieved for similar things; criteria imposed by higher-ups or established standards; ego even.

That last one is likely the most hideous!

The results which other people have gotten do often impact anyone attempting to pursue the same. A bar has been set and it can become a hindrance to some, depending on how they see it.

Quite a few people would think that only something better than what has been done is acceptable.

Another group may struggle to produce the same standard already set. That could be their reference point of perfection; and anything lesser is deemed not good.

Still, others may be willing to settle for good enough.

Worse, there would be people who would approach it egoistically. As if what they produce will be seen as an extension of themselves, these people have a different benchmark to judge what is good.

More often than not, it will not be good enough as their ego is on the line. What a self-defeating situation that invariably results in slower production; or no progress in some cases.

Failure to Start is Not Uncommon, But That’s Bad!

So, why even start when you know it’ll be hard to reach perfection? Why make yourself the butt of ridicule by producing something that’s only good enough?

Well, if nothing got started, then there’s nothing to judge and one’s ego can remain unhurt. If this has been your line of thinking, perhaps it’s time to reconsider.

Because if no one put up anything out there, nobody gets to learn about it and nothing better will ever be created. Learning by doing has to be the better way to go; and while we are at it, we try to reach perfection.

But if being imperfect at the start already bothers you, then a stalemate is inescapable.

Often, things can get put on hold. Perhaps the person is waiting for a good time to start — the stars all have to line up perfectly!

Citing perfection as a goal is the perfect excuse to procrastinate, actually. Because one need not start earlier as such.

Everything must be in place before sailing, yet nothing is being done to prepare for those necessary things. So that ship never leaves and no one gets assessed on their performance; or lack of.

Sounds like a safe scenario to be in? Fact of the matter is, time waits for no person. Your not setting off doesn’t mean others will not start.

In the end, it will be the other party who gets more experience and knowledge to get nearer to being perfect. Not you!

By the way, those experiences alone make life worth its ups and downs. For if life is not about experiencing, then what is it all about?

Which brings to mind a pair of word acronyms I had made up earlier about “Live Life” posted on Facebook here under the hashtag #MarkHWords. 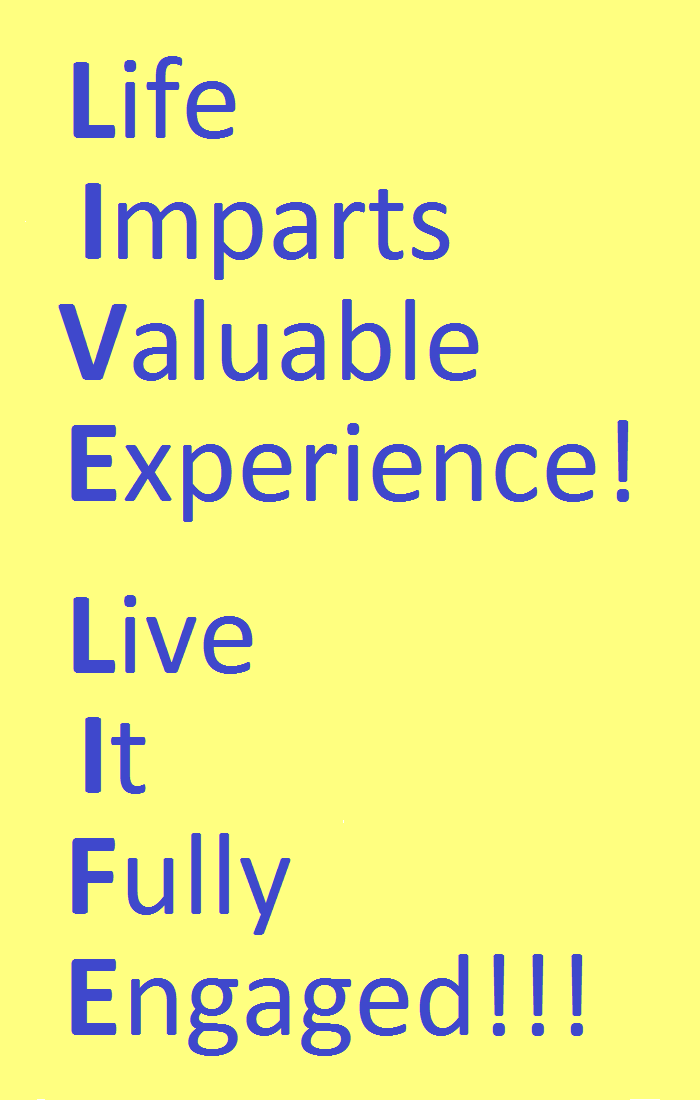 Where Do We Go From Here?

This post has been a test of the topic at hand.

No doubt, there’s imperfection in there, be it depth of content, writing style, grammar, presentation, etc. Even so, I have published it based on the idea that what I wrote is good enough.

If at some point in the future I read this and feel my writing can be better, I can always revisit, rewrite and update. There will always be new thoughts because I will gain new perspectives from experience and learning from others.

But if I held back on preparing this article, waiting for the time to be ripe, this post will never see the light of day! At best, my ideas would be just stuck in the head; more realistically, forgetfulness will set in or interests may change.

I am hopeful you see the point that imperfection is often good enough. And improvements can always follow later. There’s really no excuse to postpone production and delivery of whatever you had planned.

So, if trying to be perfect is the reason you are off-course now, steer yourself back to realizing your endeavours. My best wishes to your success 🙂